Brodiaea’s investment’s are being assembled and managed by Grapevine Capital Partners, a San Luis Obispo venture launched in 2012 by James Ontiveros and Matt Turrentine. Mr. Turrentine declined to identify the funding source for Brodiaea.

Andrew Wiltshire, Harvard Management’s alternative assets manager, also declined to comment on the investment. In January, Harvard secured 125 investors to enable Brodiaea to qualify as a Real Estate Investment Trust. A REIT structure would make it easier for additional investors to join or exit the venture, and could also pave the way for an eventual public stock offering. 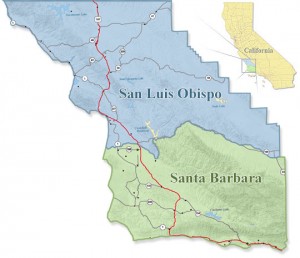 Between July 2012 and February 2014, Harvard representatives have knocked on doors and quietly spent $61 million for 10,176 acres in Santa Barbara and San Luis Obispo Counties.

The Brodiaea purchases have attracted local attention for both the market-leading prices paid for properties, and Grapevine Capital’s approach of methodically soliciting sales of unlisted properties. Near Shandon, a farming town in proximity to several large vineyard plantings, Brodiaea paid an estimated $40,366 per plantable acre. That works out to premiums of $5,000 to $10,000 per acre based on historical sales in Shandon. “The sales weren’t making any sense when they came across,” notes an area appraiser.

Though Brodiaea was aggressively bidding at the top of the market, the purchases could pay off if the vineyards can produce big crops and ride the recovering wine grape cycle.

Some market observers have wondered if Brodiaea was a well-timed water play in light of the region’s worsening groundwater shortage. Last August, the San Luis Obispo County Board of Supervisors adopted an “urgency” ordinance that prohibits any new development or new irrigated crop production unless the water it uses is offset by an equal amount of conservation. Water levels in the Paso Robles Groundwater Basin have fallen sharply in recent years—two to six feet a year in some areas—causing wells to go dry and forcing many vineyards and rural residents to drill deeper wells, according to local accounts. The irrigation development restriction remains in place through August 26, 2015. The basin supplies water for 40% of the county’s agriculture sector.

Brodiaea’s managers are now busy ripping out old vines on the San Luis Obispo tracts and redeveloping the properties. Development studies are still underway for the Santa Barbara ranch.

Harvard’s California farmland investments are just one of numerous bets in the agriculture and timber sectors that are spread across New Zealand, Romania, Latvia, Argentina, Brazil, Chile, Ecuador and Panamá. The university continues to expand its near six-year old Dairy Farms Partnership, a New Zealand venture in Central Otago, which has grown from 1,125 dairy cattle in 2009 to 7,803 head in 2013.

For the year ended June 2013, Harvard valued its New Zealand farm land holdings at $42.8 million, up 49% from the prior year total of $28.7 million, according to a company filing. The venture’s dairy cattle were valued at an additional $11.1 million.  Dairy Farms Partnership also holds stock in New Zealand-based global milk processer and marketer Fonterra Group Co-op Ltd. valued at $10.7 million, and smaller stakes in five fertilizer, farm supply, genetics and irrigation companies. Harvard Management jump-started Dairy Farms Partnership in 2010 by buying the 3,451-acre Big Sky Dairy Farm out of receivership for NZ$34.2 million (Farmland Investor Letter, Dec. 2010). The university made a “bolt-on” acquisition in June 2012 by paying NZ$2.5 million for a nearby 3,415-acre dairy. The deal included NZ$1.2 million for shares of Fonterra.

The Harvard dairy venture reported a $2.9 million operating loss for its fiscal year ended last June, versus a $1.7 million profit in 2012. However, after booking a $3.6 million 2013 paper gain in the value of its farmland holdings, the dairy reported a $4.9 million overall profit. Prospects are looking up this year on expanding global demand for dairy products.  The U.S. Dept. of Agriculture expects the U.S. farm price for milk to average $21.20 per hundredweight this year, versus the $12.83 farmers received in 2009. ■